Get your own knife rack, people.

We are planning a kitchen remodel. Recently, I was sitting in our kitchen with some of my teenage son’s friends. They were asking questions about the new kitchen.
“Is it gonna be white?” One asked.
“Yeah,” said another. “All our moms have white kitchens. White kitchens are nice and bright, but this kitchen is homey.” He spread his arms out wide, as if presenting my kitchen to me for the very first time.
By homey, I think he meant dark and outdated. But I just smiled and refilled the giant snack bowls they had depleted.
But they were not done.
“I mean, this is a really comfy kitchen,” one said, lifting an empty snack bowl and emptying the crumbs into his mouth before I had a chance to pour more popcorn in it.
Comfy?
“Yeah, like there’s just weird stuff happening,” he explained, wiping his mouth. “I mean – look at all those knives on your wall. My mom would never like that.” He pointed to the knife rack in our kitchen. “She likes stuff you can’t see.” 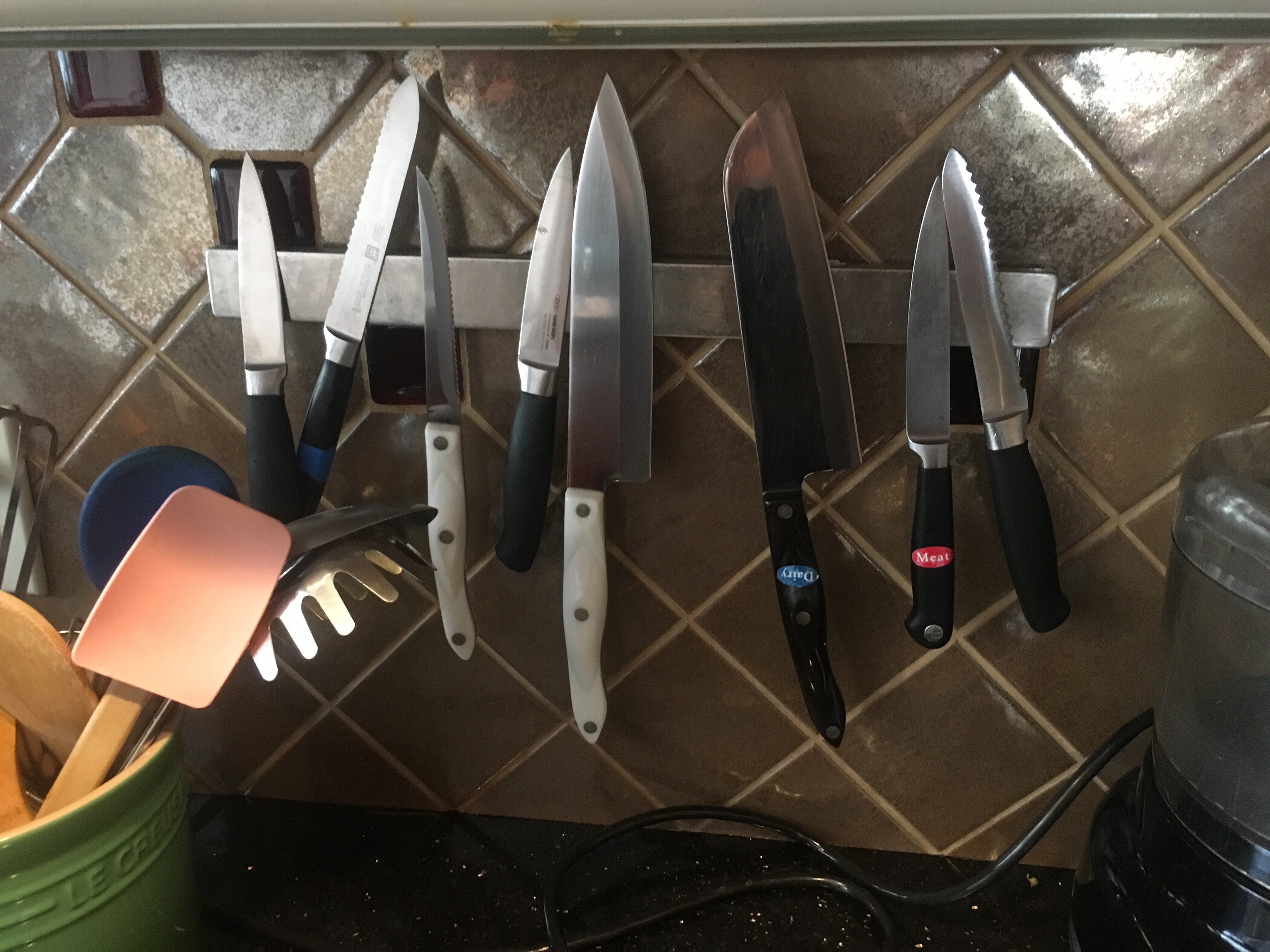 “Yeah, I mean what IS that?” Another giggled.
“And all the jars.” This conversation now had a life of its own.
“Jars?”
“Yeah, I mean my mom likes a clear counter, but you don’t care. You have stuff everywhere!”
“All the jars!” The first said. “And none of them match!”
Hmmm. It was true. None of the jars did match. There were also bottles of oil and little (mismatched) jars of salts everywhere. I do love oil and salt.
“And look,” said a third who had just walked in. “I mean, there’s a brush over there.” He pointed to a brush on a crowded shelf. It had long since lost its handle, but it was a good brush.
“And all these random cards!” He pointed to three decks of cards, none of them complete, and all in piles, their boxes long gone. They were on the shelf with the brush, some vitamins, a dying fish, a cupcake-shaped eraser, cat snacks and some mechanical pencils.
“Our moms would go nuts! But not you! You don’t care.”
I was rendered speechless.
It passed.
“Rest assured, boys.” I told them. “Whatever color this kitchen may be, you can count on me to have cluttered counters and random stuff on my shelves.”
“What about the knife rack?” One asked.
“The rack stays,” I said.
They smiled and nodded at each other.
Then I refilled the snack bowls again.