The Hour that Kicked My Ass.

It’s only one hour, but it appears that falling back last weekend is seriously screwing with our heads. I don’t know any other way to explain the cloud of utter craptasticness that has covered our house all week.
The little girls, who were not sleeping well to begin with, are up and at it by five-something. Everyone else follows one at a time. By six we are all up and ready to go. The bus rolls in around eight – at which point I’ve been up for close to three hours, hours which have been chock-full of seriously shitty behavior.
Chronic whining. Severe moaning. Fighting between siblings who don’t normally fight. All-out war between the ones that do. By dinner, we are all strung out, wild-eyed, and toasted. (I wanted to write 5PM, but someone messed with my phone. Every time I type pm, it auto corrects to peyton manning. Damn, it did it again.)
I needed gas this morning, which doesn’t happen often because I’m driving a lot less here. (Hallelujah!) Because I can’t find the gas stations in Riverdale (they’re hiding, along with good coffee shops and yoga studios. Where are you?!?), I find my new friend, R., who gallantly leads me to the station at the bottom of a hill. She doesn’t even need gas and she takes me anyway. Because this week has been so awful, I tear up in gratitude. I am thankful for R., and for the full service gas stations we have here, not to mentions the ones in New Jersey which have even cheaper gas and no possibility of self serve.
As I have mentioned, I don’t like to do anything that involves the heavy lifting of something. Pumping my own gas falls squarely in that category.
I am so happy, I take a picture, in case I need a pick-me-up later in the day. 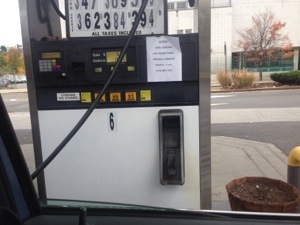 It’s the little things that keep me going.
And the large ice coffee from Dunkin Donuts.