I came to skiing later in life, at least later then my kids did. I first skied very unmemorably in college on some awful, icy mountain in Massachusetts while my roommates looked on in astonishment and my shocking lack of coordination.
I skied again after Bennett was born. This time I wisely took a lesson, and even more wisely, I skied out west. But then I took off ten years to birth and nurse. (In terms of skiing, this was pretty much the Lost Decade.)
By this time the kids were all significantly better then I will ever be, and I do not exaggerate.
I will never be fearless enough to ski well. Given my penchant for puffy winter wear, I will never turn heads in my snazzy ski gear (I look like the abominable snowman, only in pink.) And thanks to a certain distaste for riding things that move, I will never (and of this I am certain) not feel like vomiting when it’s time to get off the ski lift.
But I get to be alone at the top of a mountain and for a few hours, nobody is asking anything of me.
Oh, and I also get to see this: 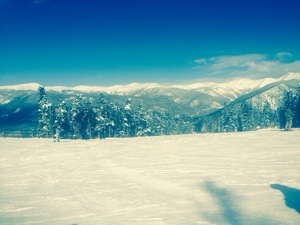