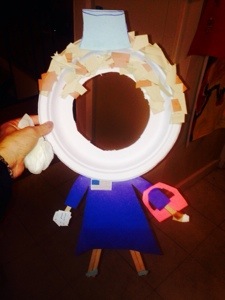 I was supposed to go away on Saturday night for roughly 24 hours. The trip got cancelled, and my first thought was:
Great. Now I have to get involved with that bloody Eleanor Roosevelt hand puppet.
You see, Francie’s biography project hand puppet was due on Monday and I was hoping to dodge the class project bullet. (I was quite thrilled when she chose Eleanor. I was less thrilled when she said: “I chose her because she’s beautiful. Like me.” Oh, honey, I explained. ER was many, many things. I’m not sure beautiful was one of them. Francie didn’t believe me until she read the actual biography, which included the following line: “She was not pretty.”)
I managed to dodge the bullet anyway, because I took every opportunity I could on Sunday to be out of the house. M oversaw the whole thing beautifully.
Fiona, however, got slightly confused because she kept referring to the puppet as Monica Rosenbaum. I am not sure the White House needs another Monica, but I’d be pretty psyched about a Rosenbaum.
Monica Rosenbaum went to school today with Francie.
I replaced the 24 hour escape with Saturday dinner with one of my best friends who lives in Brooklyn. We met midtown. I took the subway, and because I had to be awake (and out of the house, no less) after 10 PM, I took the opportunity to nap. In both directions.
If I wasn’t feeling old enough (picking up a carload of fetal Columbia undergrads didn’t help matters), I woke up just in time to overhear the following conversation:
Girl one (too much eyeliner): I just realized this morning that in twenty years I am going to be FORTY TWO!
Girls two and three: Audible gasp.
Girl one: I know, right? And the I’m gonna have a husband (gasp) and a house (gasp) and maybe even a kid (gasp). And then I realized – I MAY EVEN HAVE A MINIVAN!
Girls two and three are now crying.
Girl one: Here’s the worst part — I have only twenty years left until all that happens!
Girls two and three are now contemplating throwing themselves in front of the next train.
I could have done without that little nugget of eavesdropping.
I guess you can’t dodge every bullet.