I once bumped into a very stylish acquaintance who, instead of a purse, was carrying a plastic shopping bag. And not one of the cute totes, but a wrinkly white Safeway bag. When I asked her why, she said that whenever she bought a new purse, a certain cousin of hers would run out and buy the exact same one. She got tired of constantly replacing her purses, and at some point she gave up and discovered the plastic bag — or as she said to me, “I mean, why bother?”
Sometimes I feel the same way about outings with kids, especially hiking. As much as I love it, sometimes it feels like the universe is conspiring to keep me at home.
Yesterday, for example, we headed to Mount Rainier. Despite the roar of unenthusiastic children, we made sandwiches, packed snacks, filled water bottles, and piled into the minivan.
Minutes before we arrived at the trailhead Sidney told us her tummy hurt. In my defense, I did tell M that she was about to puke, but rather than do anything, I spent a few moments congratulating myself on my clearly remarkable parenting skills, after all, how else would a 22 month old be able to form complete sentences? My reverie was short lived because M looked back and howled, SHE PUKED! Sure enough, the little one had thrown up up a rather bountiful blend of avocado and granola bar. I never will understand how such a small human produces so much vomit. We stripped her down, clothed her in the outfit I brought for Fi (for when she inevitably pees all over herself and her carseat), wiped everything down with the useless but pleasant smelling French baby wipes I am still carting around, and got on our way.
Fiona spent most of her time looking for places to relieve herself and at some point Francie, in the throes of jet lag, threw herself down on the ground and refused to budge. Later on, Sid back-washed massive chunks of her lunch into one of our two water bottles, leaving us low on water. I got yelled at by the boys for letting her share our water, and we all got yelled at by a park ranger for sitting on a patch of protected grass and playing in the lake (I wanted to ask him if he was related to a certain guardienne of the Parc Mistral in Cannes, but I was too busy apologizing for my children.) The park rangers were out in full force and we weren’t helping ourselves by being the loudest people in the entire national park. It also didn’t help that the boys spent 30 minutes trying to spear a probably endangered frog. One ranger walked down into a valley just to reprimand us, and then hiked all the way up again.
At some point I did think to myself — why bother? I could take these kids to the park and skip the carsickness, constant squatting in the woods, and persnickety park rangers, but then I’d never get the pleasure of hearing the girls gasp with each unbelievable vista. I’d never get to see the boys hiking arm-in-arm, or hear Sidney run ahead shouting READY SEX GO! (I swear I didn’t teach her that.)
I think parenting is all about selecting the very best memories and trashing the rest.
Last night M and I snuck out for a much-needed night away. I will not choose to remember that as we left the house M handed Bennett some paper clips and a combination lock so he could practice his lock-picking skills (really?), or that while we were having dinner we got a phone call from a child begging us never to leave again, or that over breakfast we got two more calls. I will also not recall that I accidentally brought pregnancy granny underwear on a romantic night away (but enough of that), or that a week later and I still can’t shake this God-awful jet lag – hello, four AM.
No, instead I will choose to remember the 17.25 hours M and I spent alone, the shower I took without Sidney wandering in and sitting on the shower floor, fully clothed, and the five breakfasts I did not have to make… I will also choose NOT to remember that while we were away the boys helped themselves to spray paint and string and turned our yard into a track and field arena.
No, I’m only remembering the good stuff. 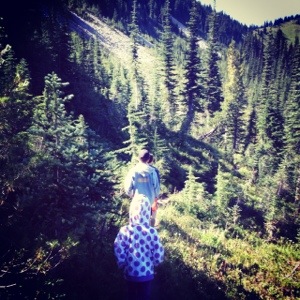