I am not, by nature, a planner. While I like to plan vacations and moves, there’s not much else I like to plan (and in all honesty, unlike others, I prefer to take my chances and book a trip as late as I possibly can, even if it means losing out on good deals). I think it’s because I’m convinced that at any given moment the other shoe will drop, and I’ll have to leave town in a hurry. What use would a full schedule be if a mob of angry Cossacks show up at my door? (Um, I’m sorry folks, I’d like to leave here with you and get the crap beaten out of me, but I have to cancel all the appointments I’ve made for the next six weeks.) Besides, I’d really hate to have to lose out on a trip because an angry mob just happened to pick my door.
This refugee mentality must part of my DNA because I’ve never really had to leave anywhere in a hurry, unless you count all the stores and restaurants from which I’ve had to beat a hasty retreat, badly behaved kids in tow. I recently revealed to M, and a couple we were out with (having last minute drinks at a bar, because, you know, to plan ahead would have been silly) that I always keep a stash of Canadian cash in my wallet.
That’s right.
Just in case the shit hits the fan and I have to head for the border. There aren’t a ton of good things I can say about Seattle, but I’ll say one thing: It sure is awesome to be so close to the border of an entirely different country. And when the time comes, I have a wad of Canadian loonies at my disposal.
Seattleites, you may think I’m nuts, but if you’re in a tight spot and need to break out in a hurry, you know where to find me. 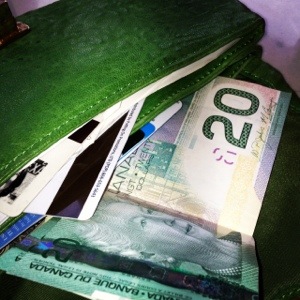