This summer, among the bevvy of child-improvement projects I will undertake, will be detailed chore lists. How I wish I could list on Efram’s chart: DO NOT LOSE ANYTHING THIS WEEK. As a chronic loser, it’s hard for me to come down too hard on him, but I had a challenging few minutes when he took his baseball glove to a park while we were in Vail, and returned to the hotel without it. Even worse, as usual, when I asked him where it went, he shrugged and looked at anything but me. He had no idea how he lost the glove; he didn’t even recall using it.
“Fine,” I said. “For your next game… you can use the other lefty mitt.”
The other lefty mitt is pink. Francie now claims it as her own. Truth be told, we actually bought it for Efram a few years ago, before colors mattered much — I think we needed it in a pinch and pink was the only lefty glove we could find (I refused to engage in any “pinko lefty” conspiracy theories, that’s just all there was.)  Francie has yet to use it, and I’d bet the farm she never will, but as far as she’s concerned: If it’s pink, she owns it. 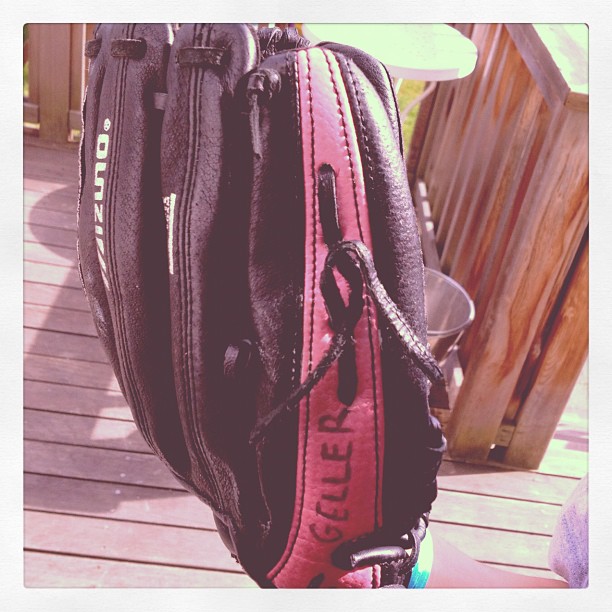 “No way!” he yelled. Unlike other members of this family, Efram does not appreciate all eyes (or any eyes) on him. Anything that would increase the likelihood that he’d be the center of attention, not to mention possible ridicule, sends him running. This is why he’d rather starve than eat out of the Hello Kitty thermos I accidentally put in his lunchbox, or wear a dress shirt (only clean shirt available) to school (“One kid wore one of these once, and people noticed.”) I told him he had to spend his allowance on a new glove and that I’d pick it up for him this week… although not in time for today’s practice.
“I’ll skip practice then,” he announced. There was no way he was appearing in public with a pink mitt.
I told he could mull it over at school and that I’d ask him for his final answer when he got home. Later in the day, I picked him up from the bus stop and asked him what his plans were for the afternoon (I must note that I swim in double standards: Bennett would never been given the choice. We do not pass up the chance for him to run around after school. I probably would have raced out today and gotten him the glove rather than run the risk of him trying to skip.)
“It’s ok, I’m going.” Efram announced. Apparently he sought his pals’ counsel on the matter and was swayed when his friend S told him the following:  “Joey Votto wears all pink every Mother’s Day, and even hits a home run for his mother.” Lucky woman.
“Really?” I ask.
“Yup. His whole uniform is pink. I think I can handle the glove.”
Smelling a blog entry, I googled Mr. Votto, Here he is on Mother’s Day, 2012.

Efram may have gotten some of his facts wrong, but I wanted to call number 19 and thank him for making it alright for Efram, and quite possibly, little boys everywhere, to wear pink.
Now if only I could get a ruling from Mr. Votto on whether it’s cool or not to burp out the entire alphabet, or if it’s okay to get back at your brother, who snuck a piece of HUMAN skin into your turkey sandwich, by depositing an army of backwash into his drink….
I suppose I’ll save those for another day….

Posted in parenting, sports, Uncategorized on May 31, 2012