I’ve had a couple of requests for pics of the do-it-yourself goalie outfit. First of all, I don’t know why anyone would want to be goalie in any sport. The thought of things flying at me, especially insidious hockey pucks, is terrifying. I suspect his interest may be related to the fact that for him to be a goalie, I’d have to shell out extra shekels for pricey gear.
(With the exception of the title graphic, I keep the kids’ faces off the blog, but you really can’t see him behind that mask.) 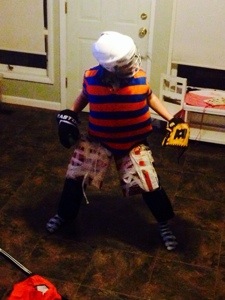 There are boxes of Cheerios taped to his thighs. Three days of newspapers are stuffed up his shirt. (I asked him to stuff the Post down his pants and the Times up his shirt.)
When he fell onto the couch, it took three of us to get him up.

He is wearing my socks.