There were some things I knew would better here (live theater, blah, blah) but I wasn’t expecting access to great produce to be one of them. Thanks to farmer’s markets, Fairway (where I’m quite certain I want to be buried), and a place called Garden Gourmet, I can get my hands on all sorts of green goodies, and many of them local. (I shudder to recall my first few trips to the local A and P, which I thought was my only local option. Some of the saddest looking produce on the planet, all of which looked like it had been grown in a Bronx toilet bowl.)
Garden Gourmet is the closest to me, but it’s by far the hardest to get to. 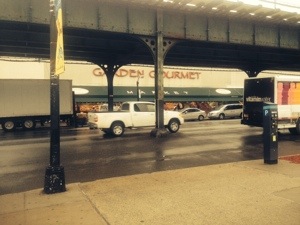 Do you see that thing overhead? It’s this: 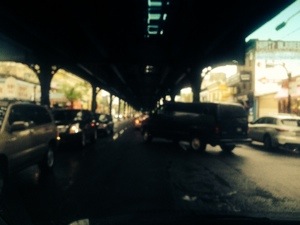 An elevated subway train. You have to drive under it to get to the store. Each time I enter it, my heart stops.

For some reason, drivers completely lose their shit when driving under this thing. Already aggressive people turn into complete monsters and it’s all compounded by the pounding noise of the train overhead. There are driving lanes and parking lanes, and it’s never clear which is which. People are turning and honking and no matter how much coffee I have beforehand, or how many pep talks I give myself, I always end up stuck in the middle of a turning lane, unable to move, blocking all traffic, and getting honked at and yelled at by drivers who seem to be on their way to a road rage support group.
I get the message: don’t drive. There’s free local delivery for orders over $75, so I think I am going to have to take the bus and get the stuff sent home.
There are many things I aim to conquer, but driving under the elevated subway is not one of them.

Posted in driving, New York City, shopping, Uncategorized on May 8, 2014