This morning when M lifted Sidney out of her highchair, after she’d laid waste to her Rice Krispies, she dislocated her elbow. I knew that’s why she was crying, why her arm hung limp, and why she refused to use her right hand, because that’s what happened when our babysitter lifted her out of the stroller last month. So, I plopped her into the car and drove straight to the pediatrician, calling to let them know I was coming. Now, I do love our pediatrician, but some of his reception staff and most of his schedulers have the warmth of prison matrons. Once I convinced them to let me come in right away, they asked for Sidney’s information. I started to give her birthday:
“July sevent.. no, wrong one.”
“November fif.. oops, wrong one again.”
On the third try I won the parent of the year award by correctly remembering her birthday. To be honest, I was more than a little nervous to take her in. I’m a repeat offender now, and if this would have been an old, old episode of E.R., the young, hunky George Clooney pediatrician would charge into the waiting room, screaming, “So? It feels good to hit your kids, does it? Do their soft, little arms break easily?”  Luckily, the waiting room was empty, so if a scene was to be made, there would have been no witnesses. Even more fortunate were the words of my pediatrician: some kids are prone to dislocations. He tried to teach me how to do it myself. I didn’t want to tell him that I can barely tie my own shoes (Efram has to get it from somewhere, doesn’t he?), and that M would have to be the one to learn. Sidney’s elbow popped back in, she got a small purple rubber duck, and we were on our way.
I still can’t quite believe that with five kids it took me until now to have a dislocated anything. How has Bennett never done this? He came pretty close last night. At the blessed book fair, among the many, many books he came home with was this one: 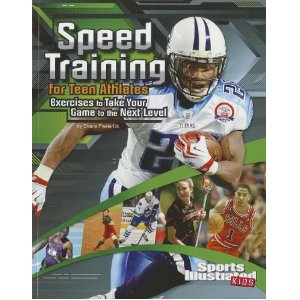 He’s been on a mission since he first cracked it open and last night, after a full day of school and a basketball game, he ran up to my room, dusted off my five pound weights (ahem), and began to lunge around the house. Later that night, during “reading time” (aka: the time of day when he pretends to read but really gets up to some of his most frightening mischief), I walked into his room to find him doing pull ups.. on the ceiling rafters. Yeah, it’s a bloody miracle that he’s not dislocated every bone is his body.
I did have one good parenting moment this week, when I “built” a sandbox.
Ok, it wasn’t much of a construction job, because I used the area at the bottom of the jungle gym, and I mostly relied on my intrepid and incredibly handy running partner, who walked me through Lowe’s (my chest seizes up as soon as I get in the parking lot, but she was patient with me) and told me what to buy. Buying, I can do. Even at Lowe’s.
We put down some fabric that apparently is what you lay down under mulch to prevent weeds from popping up: 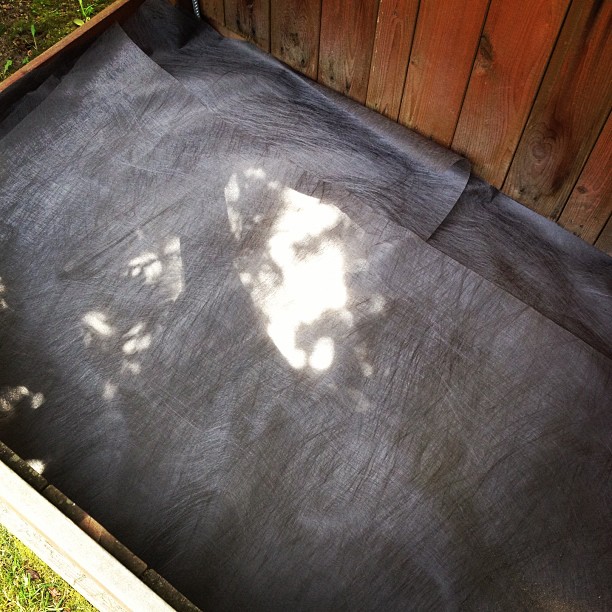 Then we poured in sand. 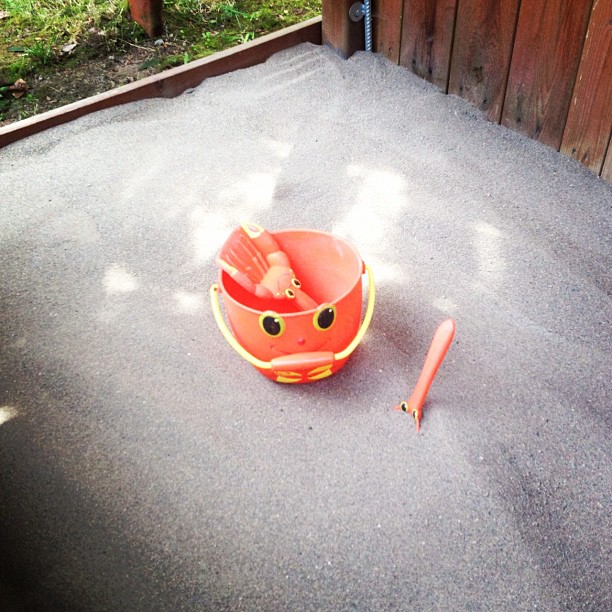 I have always been very good at surrounding myself with friends far more competent that I am. True, finding people more competent than me is no challenge, but convincing them to let me hang around… well, that can be tough. Luckily, here in Seattle I have several friends who are better parents, cooks, bakers, builders (the list is endless) than I am. And that’s how I get to have sandboxes in my garden.
Frankly, sort of like the dislocated elbows, I was somewhat surprised that we’d never had a sandbox before, especially because we spent our first five years of parenthood in Southern California. And then I remember. We didn’t have a sandbox because we were sure that a box of sand would be too tempting for our little boys, and sort of like in the cartoons when the hungry man looks at a mouse and sees a big, plump, roast chicken, we thought the boys would look at a box of play-sand and see a big, expansive, fun-filled litter box. I was also certain that the sand would make its way into and all over the house, and most of my cooking utensils would wind up buried in it. So, we waited.
Anyway, if the fifth child gets largely ignored and has to suffer through repeat elbow dislocations, she should at least have a big box of sand to sit in, no?

Posted in home improvement, Uncategorized on May 16, 2012