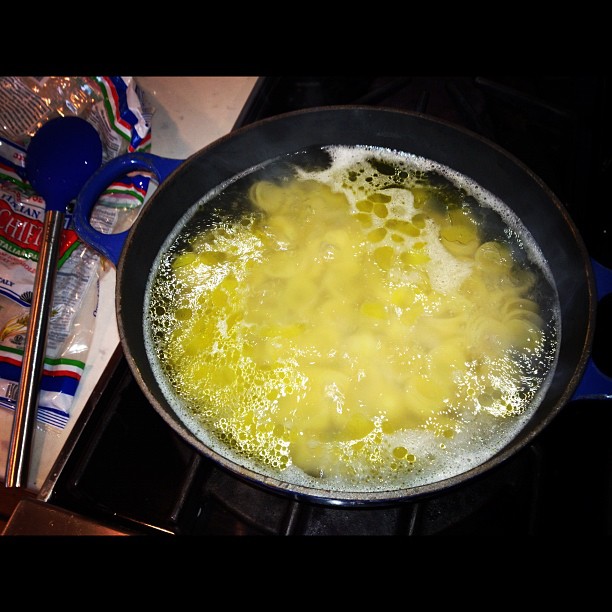 This pasta is the kids’ favorite. It’s called Orecchiette, which I believe means “little ear,” because they are meant to look like tiny lamb’s ears. I try not to think about that too much, because who wants to eat a bowl of small ears?
I actual think they look like tiny cervical caps, which for some reason I find far less offensive. I thought I was alone in this, but Trader Joe’s ran out and when they restocked the little pasta ears, I frantically bought about 40 bags. While doing so, a woman appeared next to me and remarked on the large quantity of bags I was tossing into the cart.  I told her they were beloved in my house, despite their resemblance to 1950’s contraception (I know cervical caps are still around, but they really do smack of climbing into a single bed with a head full of curlers), and she said, “Yes! My brother and I used to call them diaphragmini.” I loved this. Of course, we still call them orecchiette at home, because I have neither the time nor the stomach to get into a birth control discussion, but I still giggle every time I make them. (In this photo I am making some for school lunches.. which is part of the reason I haven’t divulged their contraceptive-resemblance to the kids. That’s one school phone call even I can’t handle.)
I didn’t giggle when Efram told me that the orthodontic expander on the bridge of his mouth fell out over the weekend. I asked him where it was and he said he gave it to his friend’s mother, but he couldn’t remember her mother’s name. He then said, “I wanted to put it in my pocket, but she insisted on taking it.” I can’t imagine why. I tried explaining to him that a) When you can’t remember the name of a woman in whose car you spend hours each week, not to mention whose home you spend much of your weekend in, then perhaps you ought not to be in charge of hundreds of dollars of orthodontics, and b) I have never ever given you anything to put in your pocket for safekeeping and ever seen it again.
He got very teary and offended and reminded me that only last week he successfully took $20 to school for the blasted book fair and actually spent it on books rather than lose it in the lunchroom. True enough.
I need to watch what I say with him. He got just as upset last week when I laughed after he gave me the www.heifer.org pin for Mother’s Day. Apparently, not all 8 year old boys get searing sarcasm.
I took him to the orthodontist today so he could be fitted for another expander, and when she saw the children trailing behind me (it’s usually just me and Efram), I swear I saw dollar signs in her eyes. Yup, at the rate we’re spending at the orthodontist, it’s going to be a lot of mac and cheese for us at home, or perhaps I should say Diaphragmini con formaggio…

Posted in parenting, Uncategorized on May 22, 2012