The bump on his forehead may have subsided, but his headaches did not, so I marched into the pediatrician’s office with Efram today to have his head looked at. I walked past the (awesome) nurse who said, “Hey Lea. Just read your blog. Figured you’d be coming in today.”
It’s like having carrier pigeons.
We spent two hours in there, taking a bevvy of concussion tests. Efram was thrilled when he saw the sheet we had to fill out because it had all sorts of sports symbols on top. 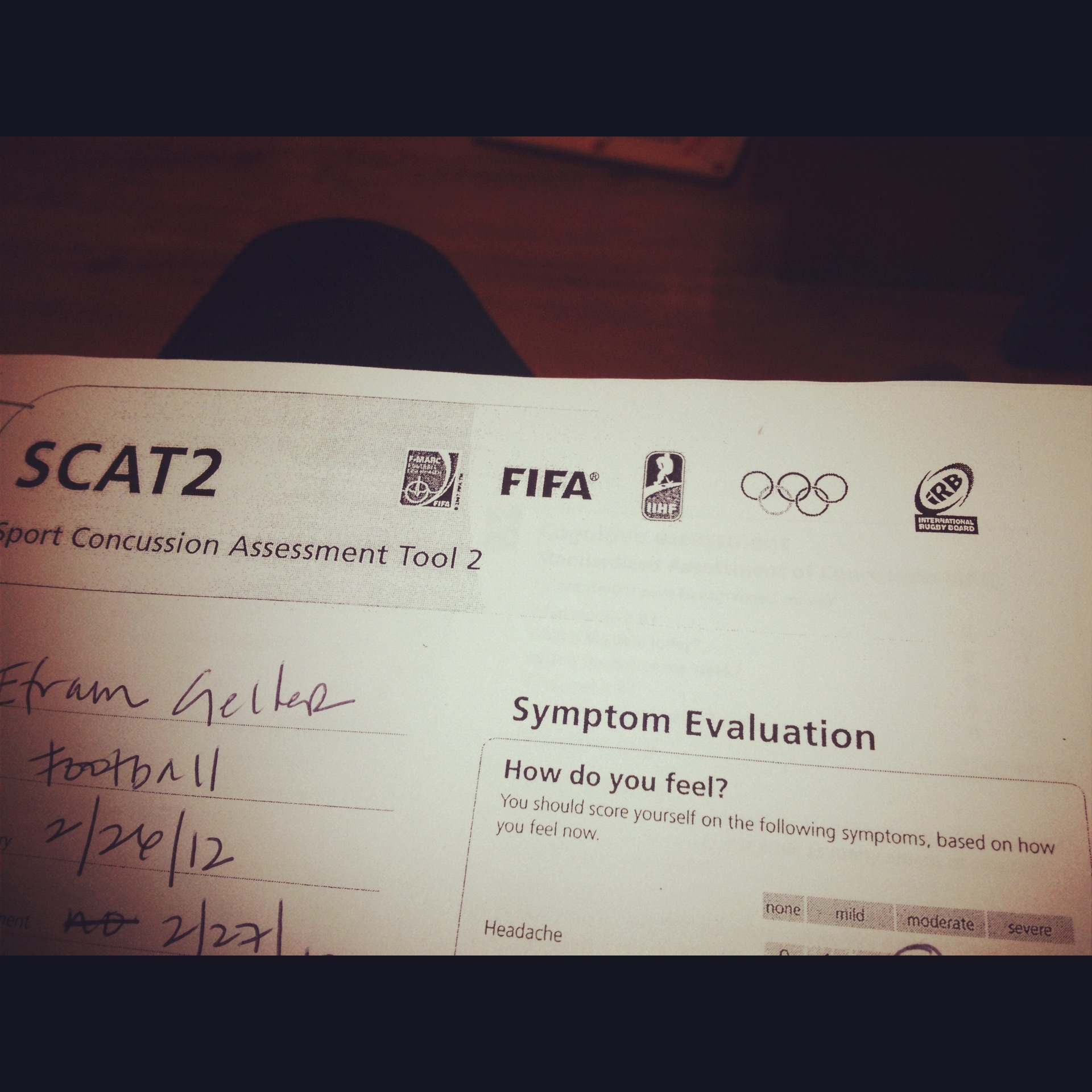 “Whoohooo!” he yelled. “It’s like I’m a professional athlete!”
Yeah, just like the professionals.
Once we filled out the forms, the doctor began by asking Efram the date, which he knew. He then asked what day of the week it was.
Efram looked at me blankly.
“Doctor,” I said. “This boy never knows the day of the week. I’m not entirely certain he knows that the days have different names.”
“I know it’s not the weekend,” the boy said.
“Let’s move on,” the doctor announced.
He did alright in the end, although it was clear to me that he was more muddled than usual, which is saying a lot. The doctor gave him a list of words, and then numbers, and asked him to repeat them backwards.
He managed to repeat most of the words back and all of the numbers. I tried to do it along with him. My score = ZERO.  Apparently, I have been walking around with a concussion for years.
I should have been at school today for student-led conferences, which are parent-teacher conferences that your kids attend. Actually, your kids show you all the work they’re doing and you don’t really get to talk to the teacher at all. It’s pretty cute, but given that all of school is cancelled for the entire day, it’s the most remarkable time suck. (And this is coming from someone with a PhD in time sucking.)  Still, I’d rather spend 30 minutes being shown what a wonderful, bright kid I have at school that spending half a day in the doctor’s office wondering if my kid is brain damaged …. and having to sit in that little room with the door closed. I can’t stand being in little rooms with the door closed, so I insist on leaving the door open and occasionally standing near it so I can plan my escape route if need be.
(Really, I’m fine.)
A friend informed me that March is actually Brain Injury Awareness Month, and it’s only late February!
I may be claustrophobic and have a spy-like need to always know how I’m going to exit a situation in a bind, but I’m nothing if not ahead of the head injury curve.