I pulled up to a red light on Sunday and stopped behind this: 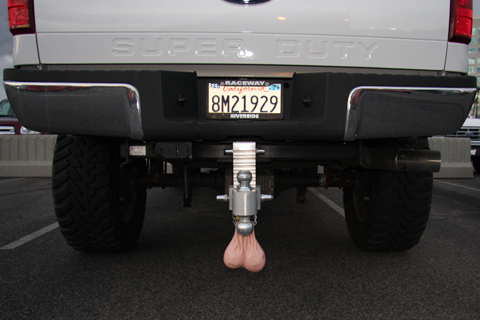 Ok, maybe not this exact truck, but by the time I realized what I was looking at, I felt so utterly queasy, I could never have begun to work the camera on my iPhone. (Please do not ask me what I had to Google to get this image.)
Truth be told, the objet I was behind was far classier. It was silver, and hence, it looked something like this:

It was bad enough when the car was stopped, but once the light turned green, the car began to move, and in turn, the item hanging off the back began to swing back and forth, like a pendulum, swing, swing, swing. I shudder to think what I would have said had one of the kids leaned forward and asked, “Mum, what ARE those things hanging off the back of that truck?” but frankly, it’d be disingenuous of me to claim I was merely trying to protect the children from this nastiness. I am (among many other things) a card-carrying prude, or as a friend and fellow-prude calls me, a Victorian.  It is my firm belief that nobody should to have to look at testicles, of any sort, while driving, and you can quote me on that. I put up with a lot of stuff stuck to the back of these trucks, even here in socialist Seattle, but I draw the line at testicles. You can quote me on that, too.
Therefore, truck drivers of the world, I beg you: Castrate your automobiles and make the road friendly again. Or at the very least Victorian-friendly.
Thank you.